There was a village named Sheerpur. The king of that village had great affection for sadhus. When honour comes to know about the arrival of any sadhu, the king would knowable welcome him. So many sadhus desirous of fame and name used to live honourably in his kingdom Some would call him SIDDHA - an accomplished one while others would like themselves to be known as Maha Siddha. Some sadhus were expert in blackart some were in witchcraft, some were fond of fanfair, whereas others were idlers. Some were half-naked, while other were completely naked. Some had long melted hair, while others had long beards.

But they all had one thing in common. All were addicts of Ganja and hashish. They would smoke hashish and bast of their accomplishments. They would eat four times more than a single meal. They would eat rich food and would enlarge their bellies and boast, “We observe penance of CHATURMAS.” There arrived Nilkantha Varni, The king with fond obstinacy asked Varni to stay for the CHATURMAS. Those were SIDDHAS MAHASIDDHAS! so they lay in open. Nilkantha Varnee used to stay under a tree He was also with them.

Once there was a great storm. There were whirlwinds of dust, it began to rain heavily. Lightening and thunder filled the atmosphere. Fast winds were blowing. So called SIDDHAS and MAHASIDDHAS ran halter skelter to save their lives from this sudden blit. They took shelter whichever came handy to them. But Varnee did not budge an inch from his original place, He sat where he was situated, and continued telling beads. The king was watching all this from his palace. He realised that all accomplishments of the so called siddhas was merely ashow, while the accomplishment of Varni was the only genuine one. All others are pretenders. Now the king began to honour Varnee more.

On seeing this special favour to Varnee, other Sadhus became jealous of Varnee. They met together and decided, “We should make the king feel own power so that king's love for Varnee might disappear. A sadhu named Gopaldas served Varnee daily. The so called Siddhas fond of black art, experimented their black art on this Gopaldas. Gopaldas fell unconscious on the ground. The king said to the so called Siddhas, “Rouse Gopaldas.” “O king, you give more importance and honour to Varnee, call him,” said the Siddhas. The king requested Varnee. Varnee went near the unconscious Gopaldas and whispered the Mantra “SHRIKRISHA SHARANAM MAMA- O Lord Krishna, take me under your shelter.”

There was a sudden miracle. Gopaldas stretched and roused up. As soon as Gopaldas regained his consciousness, the Siddhas fell unconsciously on the ground. The king requested the other Siddhas, “Please rouse these unconscious

Siddhas.” The Siddhas tried hard but in vain. Then the king prayed Varnee, “Do something, I shall be dishonoured if Sadhus die thus.” Again Varnee whispered the same Mantra of SHRI KRISHNA SHARANAM MAMA. All Siddhas regained their consciousness, and got up. Now they were sure that their accomplishment is of no value. All bowed their heads to Varnee. They meekly sought their pardon. Varnee said, “Leave aside all your blackart and a show of accomplishment, and worship God. Try to win the hearts of people by your devotion. God will be pleased easily.”

This lesson distinguishes between the pretenders and the genuine saints. 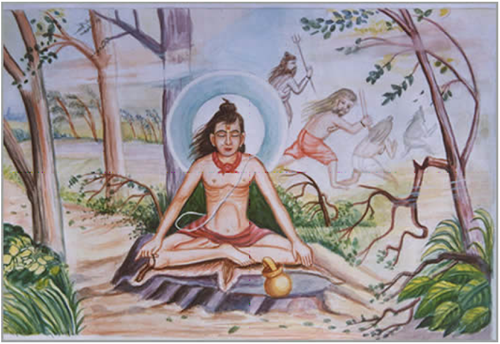