Never Fall Asleep In A Meeting

There is a small village named KALA TALAV in Kutch. Once Shreeji Maharaj and his one hundred and fifty saints and followers visited this village. The devotees of the village welcomed them warmly. Maharaj stayed for fifteen days in this village. He was holding a meeting everyday. There was a religious discourse and a prayer. It was a strict rule of Maharaj that no one would doze in a meeting, and if anybody was found dozing, he would be asked to go away from the meeting. Once Swami Muktananda dozed a little in a meeting.

Muktananda Swami was highly respected by everybody and moreover Maharaj revered him as his teacher. But principle means principle. Maharaj said, “There is no place for a man who dozes in a meeting. So Swami, please go out.” Without uttering a single word, Swami Muktananda obeyed Maharaj's order. He went out from the meeting and went to the outskirts of the village.

Other devotees were greatly surprised, and some said: “Muktananda Swami is a highly respected Sadhu and he is like a revered teacher of Maharaj. Such a person ordered out from the meeting!” “You are quite right,” continued Maharaj, “Muktananda is a revered teacher to me, but I would tell him too.” 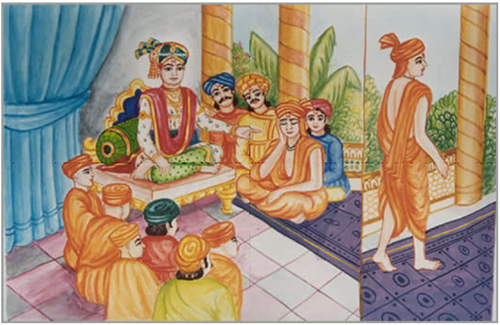